In many upcoming council races, there is a clear favorite. Here’s why District 16 is different.

In one of the few districts without an incumbent, District 16 candidates Kristin Jones, Laura Giffel and Mike Smith are vying to represent a district that doesn’t follow party lines.

In less than two weeks, voters across Indianapolis will go to the polls and select the 25 members of the City-County Council.

In many of those races, incumbency and party affiliation have made the winner almost a foregone conclusion.

And then there’s District 16.

Here, in a region that represents areas such as Fletcher Place, Fountain Square and the Old Southside, three candidates have taken to the streets to talk to registered voters in one of the most active district races in the city.

It’s also a campaign made that much more interesting because there is no incumbent and it is very much defined as a swing district.

Perhaps that’s why neither the Republican nor Democratic candidate wants to be defined by the politics of their party. Politics, they like to say, don’t matter to them. Their neighbors do.

Hackney:A mayoral election is fast approaching. What will uninformed voters do?

The candidates, in order of how they will appear on the ballot, are Democrat Kristin Jones, Republican Laura Giffel and Green Party candidate Mike Smith.

“Because there’s no incumbent running, because it’s an open seat, we have two active credible candidates jockeying to be the next councilwoman and a third-party candidate in this case,” Shreve said. “I think it would be less so if it weren’t an open seat.”

Of the 25 open council seats, 18 feature incumbents running for re-election. Democrats are fielding a candidate for every position except seat 23, where Republican Paul Annee is running unopposed. Republicans are fielding candidates for all but one district,held by incumbent Democrat Councilor William “Duke” Oliver.

In the last election in 2015, council candidates were running in newly drawn districts that faced rounds of lawsuits as Democrats said the redrawn districts unfairly favored Republicans.

The current District 16 is a combination of portions of former districts 23 and 19. Where District 19 was competitive during election cycles, Shreve said, District 23 was considered a safe Republican area.

Shreve said the result is that District 16 represents voters who are “more likely to be independent-minded voters, rather than hard Republicans or hard Democrats.”

“That’s my sense of the constituents I represent,” Shreve said. “They are active and engaged and have strong views of what they want their neighborhood to be.”

Marion County Democratic Party Chair Kate Sweeney Bell said there is more community engagement in the district than there has been previously.

“There’s so much that underpins Indianapolis as a whole that is located within District 16,” Shreve said. “(The districts are) portioned equally based on residents, but this district really is the economic heart of Marion County. That also means there’s more coming down the pipeline that engages the councilor related to the new development in our city. There’s dramatically more in District 16 than there would be in District 25 in Franklin Township.” 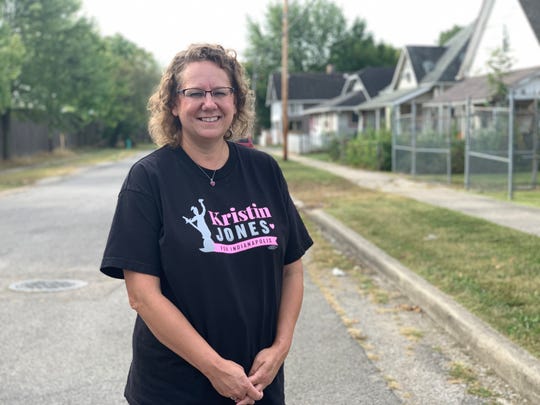 For Jones, a future in politics spawned from a knock on her door.

It was state Rep. Justin Moed — then a candidate for the Indiana State House of Representatives. In April 2012, he asked if he could help her and her family. It didn’t take long for Jones to become his full-time volunteer.

Jones, the current director of community engagement at a local nonprofit, has volunteered politically since then.

She announced her candidacy in August — just days before Miller resigned — and held her launch party in November. She was the first to declare candidacy for District 16 and she’s been knocking on doors across the district ever since.

“The reason I did this is because I love my community,” Jones said in an interview at the Marion County Democratic Party’s campaign office. “I love the people and I know its issues. And I was ready. I was ready to do this. I was ready to step up and lead the way for our people.”

Love is certainly part of the big picture for Jones. She wears a heart-shaped necklace almost daily and her slogan, “Kristin Jones for Indianapolis,” features a heart at the end with everything but her last name inscribed in a light pink.

“If I want to do this, I’m gonna do it my way,” Jones said. “I want to be different. I didn’t want a blue or red or political type sign. I wanted to be me and I wanted to be authentic to me.”

As she goes house to house, Jones reports issues for constituents: everything from potholes to streetlights to illegal dumping. Later, she’ll call orsend residents a handwritten postcard with a confirmation number to follow up with the request in the mayor’s action center.

Jones has aimed to not leave anyone out of the conversation, something the candidates say has happened all too often to residents of West Indy. And the issues west of the White River vary from the needs of residents in Center Township. 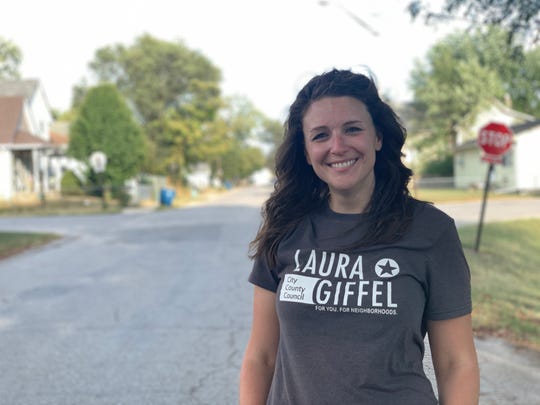 Giffel, a licensed mental health counselor and self-described professional listener, was sitting with friends when she decided to run for office.

She is also the president of the Bates-Hendricks Neighborhood Association.

Giffel moved to the neighborhood 5 years ago and knew immediately that it was where she wanted to be. She has been on the board for 4 ½ years.

The White River, Giffel said, is a true barrier.

“But, they’re going to see the same changes that we’ve seen,”  Giffel said at a coffee shop near downtown. “They’re going to see the exact same struggles we had with land use issues, with pushy developers, with affordable housing concerns. And those are all battles we fought here and are currently fighting.”

Like Jones, Giffel also has pushed for non-partisanship, even though she’s a member of the Republican party.

That’s only for the ballot.

“There isn’t a Republican or a Democrat way to fix our sidewalks, right?” Giffel said. “We just fix them.”

When out canvassing, Giffel first introduces herself as a candidate for the council. She’s going around to homes twice, so the second time she comes by she checks back in to see how residents are doing. She visited with one man about a pothole-stricken railroad track street crossing that hadn’t yet been fixed by the city.

“It’s been really hard, I think, for all of us to separate the national politics from what’s going on locally,” Giffel said. “And we just don’t have much space in the world of politics, because as soon as you come in and knock on someone’s door, I think they assume it’s the same stickiness and nastiness that’s happening on a national level is what’s happening here. And that’s so not true.” 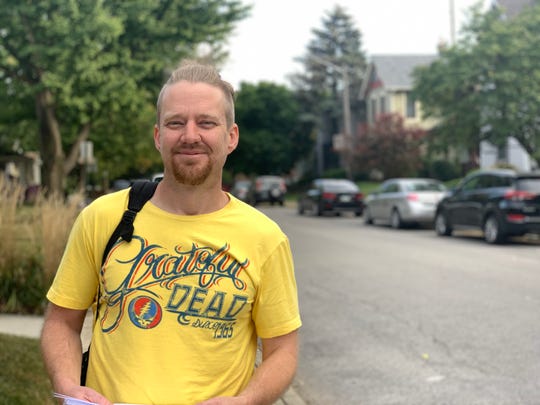 Smith’s campaign has been different from his Republican and Democratic counterparts. Instead of using an app to find doors to knock, Smith has a list of registered voters. He had to put in a public records request to get it.

And instead of delivering every-day yard signs and mailers to constituents, he drops off business cards and hand paints his yard signs.

“I want to give the voters a chance at a true grassroots choice,” Smith said in an interview at Shapiro’s. “I’m there for them. … Nobody’s buttering my bread. I’m not here to make money. I’m just here to try to do the right thing.”

Smith, the only Green Party candidate on the ballot this year, decided to run in December after sitting in on a meeting where he heard a developer talk about not caring what happened to residents. In March, Smith started canvassing signatures to earn a spot on the upcoming ballot. He needed 131 signatures, but collected more than 300.

And Smith has raised just $120 in his campaign — a number he’s proud of.

How to vote in the Indianapolis municipal election

The election is Tuesday, Nov. 5. Marion County residents can use the Voter Information Portal to find details on polling places, check their registration and see who is on the ballot. More information about early voting is available online.